Zwitserland Rating: 3.0 out of 5
Review by bushdoc -

Oh my! This is some OG weed. They musta been smokin’ gear like this back in the 70's! It looks a bit like Buddha Thai stick that has been cured and packed outside. It's yellow-green with orange hairs. Tiny crystals cover the interior giving the Rainbow warrior effect against the darker leaf colour.

There is an odd scent of a cigar-tobacco that's been cured in a sweet brandy as you first open the bag. As ya bust it up, it gets a bit more minty.

The flav is definitely bio-sweet. There is somewhat of a sugary anisette-licorice taste when you put this stuff in the vapouriser. In a spliff, you are not gonna taste the sweet as much so you may wanna smoke it pure.

But be careful with that! This stuff had me trippin’! Visually impaired, I looked around with blurry eyes and a stupid grin. The FX last for daze and daze, and turned me into a Munchy Master; eating everything in my fridge and digging round the house for anything sweet. I found TWO loose peanut M&M's in my desk drawer and was happy as hell! You would’ve thought I found a winning lottery ticket by the look on my stoned face!

This is the kinda weed that those of ya who wanna give up tobacco and smoke pure may like to invest in. It is extremely good value for money at under €4 per gram and the FX are quite wicked considering its average looks. Well done Zwitsers!

other reviews from Any Day (CLOSED) 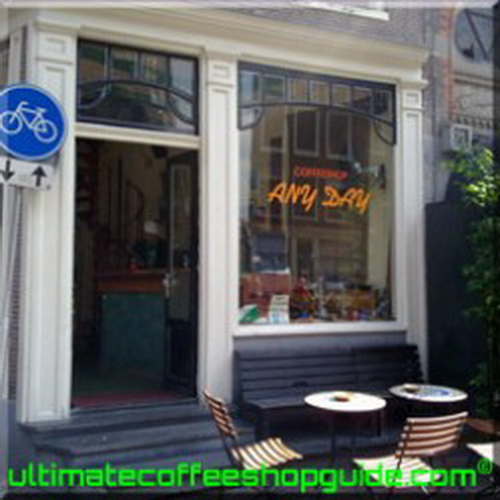