Just look at the photo here: Solid pieces that look like they are little balls of fire! You'll find the occasional variegated leaf here, showing to be a bit darker than its mates. There are a large number of tiny orange-red hairs that stick out from nearly every calyx and where those are not visible, copious (by that I mean shitloads) amounts of white resin crystals are found.

This stuff really smells strong! There are incredible "wafts" of ginger, lemon and antiseptic and chemicals. Weeds like this always seem manufactured to me. There is no way nature could produce such strong yet outrageous scents'. Right?!?

By burning it, I took a few drags and was very happy to find fresh anisette and a tangy citrus. Man, this is so hard to contain, if u take too much of a hit, u will be coughing for about 2 minutes straight. This resulted in me running down the Warmoesstraat to Stone's Caf� to grab an ice cold brew, followed with a Jagermeister shot. The Jager actually completed the sour icy taste of the OG perfectly.

After the coughing subsided, I felt completely in La-La Land. My head felt like a fishbowl with a bunch of spastic fish floppin� around inside! Maybe they were gasping for air�Maybe I was just tripping! I wasn't even close to sleepy mind you, just generally mashed up�Real good like. This is the type of gear that goes great with music and sitting in the Stone's you are likely to be satisfied with the various tunes.

The genetics are proper and this particular batch was grown to perfection. You�d better have something cold nearby to help chill you after this because the gnarly amount of crystals will have you gasping for air as you head off for a rather trippy adventure!

other reviews from Stone's Cafe 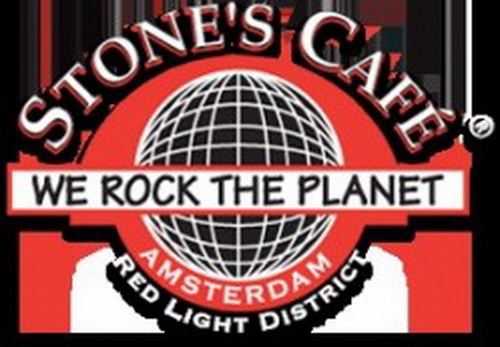