Bicycle laws have always existed in Amsterdam, together with regular traffic laws, but were often lightly carried out. For years, it seemed like "anything goes"...As of July 1st, 2019, changes have been made, and new laws are strictly being enforced. Read about the changes, before you get hit with a €95 penalty!

When you think Amsterdam, bikes are the first to come to mind. The city is well known for being an inconvenient place to drive a car; finding parking is often an exhausting task, super pricey (€6 per hour in city center for street parking), and with each year, less available. Our primary modes of transportation are bicycles, and you will see them on every corner, of every street, in every city of the Netherlands. Despite the amount of rain we get per year, bikes are still the easiest, quickest and most suatainable way to get around this flat land.

No matter the financial status of the people, bikes are ingrained in the Dutch lifestyle, and to a certain degree, so are motorized scooters. Sadly, in the latest years, many scooter drivers were causing chaos and accidents, which forced the city to tighten the laws and disallow them from bike paths.

Can You Smoke Weed and Cycle? Click link to read more

As mentioned, biking laws in Amsterdam were pretty loose and even though steps have been made to curb bad road habits, there is still a lot of habitual behavior that is hard to control:  Cycling with an umbrella? Child standing in the back? No helmet? Extreme decorations? These, although potentially affecting road safety, for now remain unaddressed in the regulations. Helmets are still optional on bikes, even for children and infants. 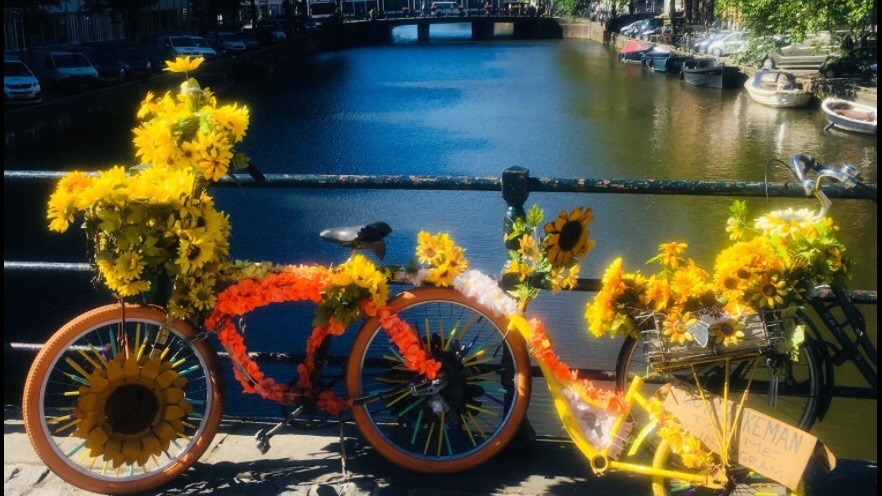 Ignoring traffic lights? No lights at night? Although always illegal, the government promises to strictly enforce these rules, with a "boete" (fine) of €95. You are required to abide by the streetlights at all times, and use a white front light, and red back light, between dusk and dawn, which if you have ever lived this far up North in the winter, means most of the day ;-)

The City of Amsterdam has finally made legal changes to clean up the rules, and it is enforcing the new laws with "zero tolerance" teams of Police and Handhaving (aka Enforcement, a step lower than the Police force, but still able to write tickets for violations), as of July 1st, 2019. You can expect them to be waiting along busy bike paths, roads and large squares. They are easy to spot; usually dressed in fluorescent vests, in large intimidating groups. The following picture is an example of a control at the Koningsplein in the center of Amsterdam.

The largest change in regards to bike laws: No more apping while cycling, the legal guidelines mention the messenger "WhatsApp" in particular. Holding a phone / navigation or any other electronic device will result in a €95 fine. Despite what an actual police officer told us on the street, according to the Dutch government's regulations, you will still be allowed to listen to your navigation, music, or take a call, while using headphones or a phone attachment for your bike, as long as you are hands-free, able to hear traffic, with using one headphone as a preference. The idea is to not endanger anyone on the road or bike lane; rightfully so.

Cleaning up the bike mess

Until now, parking your bike on the street meant leaving it wherever convenient for you. This would often include the middle of the sidewalk, blocking doors to homes and businesses. Recently, the city started introducing platforms designating parking spots for bikes and scooters, and marking sidewalks with warning signs. The city is strongly enforcing this, so forget about leaving your bike anywhere on Dam Square or Rembrandtplein, or it will swiftly be removed. If it happens to be locked to anything like a bridge or advertising post, the lock will be cut, and forget about any reimbursment. Although this rule has made walking around easier (especially for those with special needs), parking bikes in town has become a big pain.

My bike is gone. What now?

If you leave your bike in a place that is not designated by the city, or specifically forbidden to park, the city will take it to the Fietsdepot. It will first be controlled to see if it has been reported stolen, using the number embedded on the frame. Trying to claim such a bike can result in losing your bike and possibly some serious trouble for you unless you can prove where you bought it. If your bike has a clean record, you will be able to claim it for a fee. In some cases, depending on your location, you can request it to be delivered to you for a fee. For more details on getting your bike back, visit the City of Amsterdam's website. If you get your rental bike empounded, you may be looking at some higher costs from the rental company, so make sure to check the terms on your agreement. Better yet, park it in designated areas only.

Surprising Dutch biking rules you may not be aware of...

While researching the new rules for bikes and scooters for this article, we were quite shocked to find how many things bike related you can get busted for! If you read Dutch, visit the Fietsersbond website for a full list. Here are some examples of very common violations:

If you did not know about the above rules, you most likely are not alone. But, considering the government is trying to make a point about improving safety and enforcing laws, its good to brush up on your Netherlands and Amsterdam bike law knowledge, and save yourself some serious money!

Can You Smoke Weed and Cycle? Click link to read more