“I know we’re not supposed to do this…but I would call on people to break the law! To come here, and use cannabis here and see what happens...challenge the government, the authorities, to arrest them and take them in. That’s the only way it’ll get through the...mind of the government which is set in concrete. The whole law is evidence free and prejudice rich!” - Paul Flynn MP

After Paul Flynn's passionate speech in Parliament (above) many cannabis activists, including the United Patients Alliance, now plan to answer his call and meet outside Westminster, the UK parliament building, October 10th.

A chance for supporters of change in the UK’s cannabis laws to come together, and with safety and power in numbers, smoke out parliament! 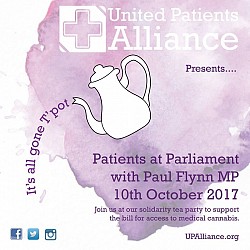