New reforms in Jamaica mean cannabis has been decriminalized! In early 2015, the Jamaican Government amended its Dangerous Drug Act to finally recognize Rastafarian religious and sacramental rights to use ganja and also decriminalized the possession of up to two ounces of cannabis for adults including tourists!

The High Times 2015 Jamaican Cannabis Cup portion of Rastafari Rootzfest will gather the best ganja from traditional farmers in each Jamaican parish and, applying the standards and practices acquired from more than a quarter-century of High Times Cannabis Cups competition, will qualify the wonderful enigma of Jamaican herb. You'll also find a variety of seminars on topics including legalization and regulation featuring experts, grow seminars and even cooking seminars.

This will be the first Cannabis Cup in Jamaica, but check out some videos of Cannabis Cups from around the world below! 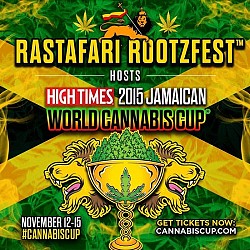